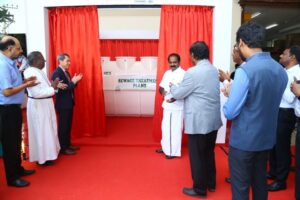 Meyyanathan spoke about the importance of preserving our environment and water bodies and adopting the latest technologies in pursuit of the same. He also mentioned various initiatives of the Tamilnadu Government towards this. He also mentioned the manufacturing unit being set up by HECS at Vallam Vadagal to manufacture Sewage Treatment Plants and stressed the need for treating and reusing sewage.

During his speech at the inaugural event, Dustin Bickel – Economic Officer of the US Consulate, stressed the bilateral co-cooperation between both countries on environmental protection and climate change. He also spoke regarding the growing need for sustainable development.

Dr JR Moses, CEO and Managing Director of HECS, further spoke about their new manufacturing facility, which is to be set up at SIPCOT Vallam Vadagal on the outskirts of Chennai, which will be operational by October, 2022.