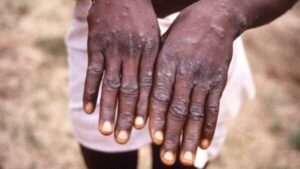 Latest data released by the UK Health Security Agency (UKHSA) showed the number of confirmed monkeypox cases in the country has reached 1,076.

According to UKHSA, up to June 26, 2022, there were 1,076 laboratory confirmed cases in the UK. Of these, 27 were in Scotland, five in Northern Ireland, nine in Wales and 1,035 in England. Since the WHO’s previous update on June 17, there have been 1,310 new cases reported, with eight new countries reporting cases, Xinhua news agency reported.

It means almost a third of all cases in the world reported since the current outbreak started have emerged in the UK.

In its latest update issued on Monday, the WHO said since January 1, and as of June 22, there have been 3,413 laboratory confirmed cases and one death reported to WHO from 50 countries and territories in five WHO regions.

WHO said the majority of laboratory confirmed cases, 2,933 of the 3,413 cases, are in the WHO’s European region. This accounts for about 86 percent of the total.