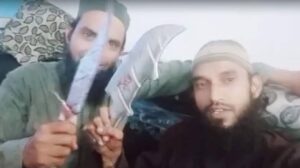 Two accused who beheaded a man in Udaipur on camera have been arrested from the Rajsamand area in Rajasthan.

The deceased who was a tailor by profession was killed brutally for putting social media post in support of former BJP spokesperson Nupur Sharma. The accused are from the Surajpole area of Udaipur.

Both the accused who brutally murdered a man in Udaipur were arrested from Rajsamand. The investigation, in this case, will be done under the Case Officer Scheme and by ensuring speedy investigation; the criminals will be punished severely in the court, said Rajasthan chief minister Ashok Gehlot.

The law and order situation is under control. Some people were attempting to come out of the bylanes but were controlled. Curfew imposed in the nearby areas, said Manoj Kumar, SP of Udaipur.

Former Chief Minister and Bharatiya Janata Party (BJP) leader Vasundhara Raje flayed the Congress-led Rajasthan government over the beheading incident in Udaipur and held the Ashok Gehlot government`s policies of incitement and appeasement for communal violence in the state.