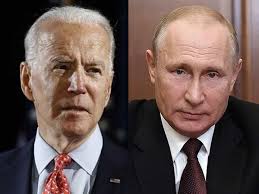 Washington: US President Joe Biden on Wednesday said Russian President Vladimir Putin is getting ‘exactly what he didn’t want’ — the NATO-zation of Europe, the media reported.

Biden praised the diplomatic breakthrough that resulted in Turkey pulling its objections from Sweden and Finland joining the alliance, marking its biggest expansion since the 1990s, the Daily Mail reported.

“Putin was looking for the Finland-ization of Europe and we’re going to get the NATO-zation of Europe,” Biden said when he met NATO Secretary General Jens Stoltenberg upon his arrival at NATO headquarters on Wednesday morning.

“And that’s exactly what he did not want to do — it’s exactly what needs to be done to guarantee security for Europe. And I think it’s necessary and I’m looking forward to it happening,” the US President said, the Daily Mail reported.

Biden will meet Turkish President Recep Tayyip Erdogan on the sidelines of the NATO summit.

On Tuesday evening, after multiple rounds of talks, Turkey lifted its objections to the two Nordic states joining the alliance.

“I am pleased to announce we now have an agreement that paves the way for Finland and Sweden to join NATO,” Stoltenberg said that evening when he announced the deal.

“Turkey, Finland and Sweden have signed a memorandum that addresses Turkey’s concerns, including around arms exports and the fight against terrorism,” he added.

The three nations agreed to protect each other’s security as Europe faces its worst security crisis in decades in the wake of Russia’s invasion of Ukraine.

In order to affirm the new members, NATO’s 30 allied parliaments must ratify the decision by leaders, a process that could take up to a year.