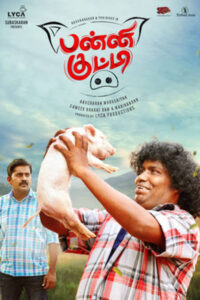 Director Anucharan’s much-awaited entertainer ‘Panni Kutty’, featuring comedians Yogi Babu and Karunakaran in the lead, has been cleared for release by the Censor Board of Film Certification with a clean ‘U’ certificate.

Lyca Productions, the firm producing the film, made the announcement on social media. On its Twitter timeline, the firm said, “‘Panni Kutty’ is censored with a clean ‘U’ and is ready to meet you all at the cinemas on July 8th.”

The film, whose title in English means ‘piglet’, has created interest for several reasons. The first among them is that director Anucharan Murugaiyan’s just released web series on Prime Video, ‘Suzhal -The Vortex’ has garnere