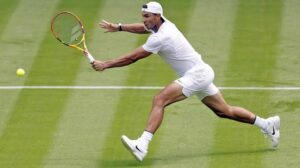 World No.4 Rafael Nadal kept his quest for a record 23rd Grand Slam alive by beating world No.102 Ricardas Berankis in four sets to reach the third round at Wimbledon.

It was far from the most convincing Nadal performance and the Spaniard has now had to go four sets in both of his two matches on Centre Court, having overcome Argentine Francisco Cerundolo on Tuesday.

Nadal, who already has two Grand Slams under his belt in 2022, admitted himself that his forehand was far from its best at times and Berankis exploited that, taking the third set off the two-time Wimbledon champion.

Italian Lorenzo Sonego awaits Nadal in Saturday’s meeting with the 27-year-old looking to reach the fourth round of the SW19 tournament for only the second time.