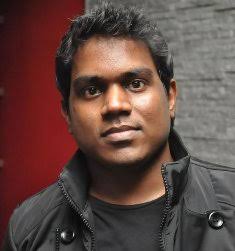 Coffee with Kadhal is being bankrolled by
Khushboo Sundar on behalf of Avni Cine Max and ACS Arunkumar on behalf of Benz Media are producing the film. The film is directed by Sundar.C who is prominent for directing wholesome entertaining films.

Coffee With Kadhal is a  family drama with a love story, says the film unit.

Yuvan Shankar Raja is composing music for the film and now the first single of the film has been released.
Director Sundar.C’s films always feature a colourful  family dance number. Popular old songs are remixed and make all the stars to shake a leg to it.
Prior to ‘Coffee With Kadhal’, Sundar.C had remixed super hit songs like Vennila Veesuthey for ‘Amabala’ and ‘Vanga Machan Vanga’ for ‘Vanda Rajava Than Varuven’.
Now, ‘Coffee With Kadhal’ features the song “Ram Bum Bum Aarambam Bumbumbum Perinbam from ‘Michael Madana Kamarajan’ which was sung by SBP and Chitra and starred Kamal Haasan and Khushboo.
Tags:Yuvan Sundar C