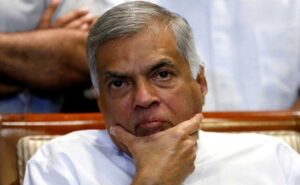 Sri Lanka’s Cabinet was thrown into turmoil by the resignation of Aviation Minister Nimal Siripala De Silva while another senior minister demanded that Prime Minister Ranil Wickremesinghe should quit as the Finance Minister alleging that he halted all the projects that could bring in the much-needed forex to the country facing worst economic crisis.

De Silva, Minister of Ports, Shipping, and Aviation, resigned following an allegation made by main Opposition SJB leader Sajith Premadasa in Parliament on Tuesday that a Cabinet Minister had solicited a bribe from Japan’s Taisei Corporation.

De Silva, in a letter addressed to President Gotabaya Rajapaksa, said although he was not directly accused of demanding a bribe he was resigning in order to allow an impartial investigation as the allegation concerned his ministry. As per media reports, the Japanese firm is involved in the expansion of the Bandaranaike International Airport.