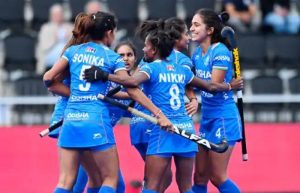 Amstelveen : A wasteful India lost 3-4 to New Zealand in their final Pool B match but still qualified for the crossovers of the FIH Women’s World Cup as the third best team from their group in Amstelveen on Thursday. New Zealand topped the pool with seven points ahead of England (4), while India and China finished on two points apiece but progressed on account of a better goal difference. According to the tournament format, the top four sides from four pools will directly qualify for the quarterfinals, while the second and third placed teams will feature in the crossovers. The winner of the crossover matches will grab the remaining four quarterfinal spots. India will now play the second placed team in Pool C for a place in the quarterfinals in Terassa, Spain on Sunday.