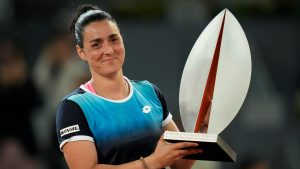 London : Ons Jabeur became the first African woman in the Open era to reach a Grand Slam singles final on Thursday when she defeated close friend Tatjana Maria in the Wimbledon semi-finals. The 27-year-old world number two from Tunisia triumphed 6-2, 3-6, 6-1 and will face either 2019 champion Simona Halep or Elena Rybakina in Saturday’s championship match. “I’m a proud Tunisian woman standing here,” said Jabeur, who was the first Arab player to make a Slam semi-final. Before Thursday, South Africans Irene Bowder Peacock, at the 1927 French Open, and Renee Schuurman, in the 1959 Australian Open, were the only African women to have reached a Slam singles final. “It’s a dream come true from years of work and sacrifice. I’m happy that’s paid off and I’ll continue for one more match,” said Jabeur. “Physically, Tatjana is a beast, she doesn’t give up, I thought she would give up — her touch, her serve and everything on the court is impressive. I hope she’s continues this way. Let’s not play again I’m good for now. “I know in Tunisia they are going crazy right now. I want to see more Arab and African players on the tour. I love the game and I want to share the experience with them.”