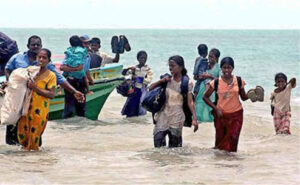 Six more Sri Lankans, fleeihg the economic crisis-hit country, arrived here on Wednesday, officials said.
Three of them were children. The two different families had left their hometown of Jaffna in Sri Lanka and arrived here by a boat before officials rescued them from an islet and took them to the Mandapam refugee camp.
Scores of Lankans, mostly Tamils, have entered the country through Tamil Nadu in recent months as they were unable to survive the crisis that has crippled the island nation. Prices of essential commodities have been skyrocketing there.
Last week, seven people belonging to two families in Lanka arrived.
The two families, dropped near Rameswaram island by boatmen, were rescued by the Indian Coast Guard and brought to Dhanushkodi and handed over to the police.
Tags:SL Refugees Lankan Coast