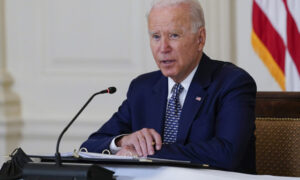 US President Joe Biden reacted sharply to the sentencing of American basketball star Brittney Griner to nine and a half years in jail by a Moscow court Thursday, saying it is “unacceptable” and she should be released immediately. Griner was sentenced to nine years in jail and fined a million rubles (roughly $16,000) as punishment for allegedly flying into Moscow on February 17 with 0.702 grams of cannabis oil.

Biden said in a statement the sentence is “one more reminder of what the world already knew: Russia is wrongfully detaining Brittney”. “It’s unacceptable, and I call on Russia to release her immediately so she can be with her wife, loved ones, friends, and teammates,” added. The American President vowed his administration will do “everything possible” to bring Griner home, as well as Paul Whelan, a former US marine arrested by Moscow allegedly for spying. He was tried in a secret court and sentenced to 16 years in jail. The Biden administration has offered a prisoner swap for the release of Griner and Whelan in return for Viktor Bout, a convicted arms dealer. Moscow has been cool to the offer thus far. Relations between the US and Russia have been tense over the Russian invasion of Ukraine. US-led western powers have slapped unprecedented sanctions against Russia and are providing billions of dollars in military assistance to help Ukraine beat back the Russians. Prisoner-swaps are common between the US and Russia (going back to the erstwhile Soviet Union. The two countries exchanged prisoners just this past April. America has a history of swapping prisoners with other countries as well – Iran, Cuba, and the Taliban too . American experts believe the swap will happen in this case as well and that the stiff sentence for Griner was an attempt by Moscow to raise the cost of her release and Whelan’s. At her sentencing, Griner apologised for her “mistake” and said: “I never meant to put in jeopardy the Russian population. I never meant to break any laws here. I made an honest mistake and I hope that in your ruling that it doesn’t end my life here.” She added: “I know everybody keeps talking about political pawn and politics, but I hope that that is far from this courtroom.” “I want to say again that I had no intent of breaking Russian laws. I had no intent. I did not conspire or plan to commit this crime.”