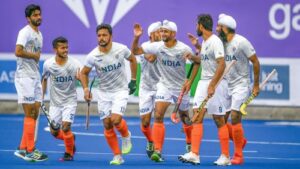 India’s star dragflicker Harmanpreet Singh continued his good work with the stick as he scored a hattrick of goals vs Wales in India’s fourth match in men’s hockey competition at the Commonwealth Games 2022. Courtesy his 3 goals and one by Gurjant, India beat Wales 4-1 to continue the good work. This is India’s third win in the tournament in four matches with the game vs England finishing in 4-4 draw. The England draw was like a loss to India who dominated the game throughout but could not maintain the same tempo last few minutes of the match. Since then Graham Reid’s side has learned from the mistakes and come out all guns blazing, to thrash Canada 8-0 a day before and beat Wales. Wales managed to score a goal by Penalty Corner in the dying minutes of the match. India looked little rusty in the last five minutes of the match. The intensity went missing and Wales continued to create opportunities in order to make a comeback. But it was too late by then. India quickly pulled up their socks again and started playing passing game to kill the time. The match belonged to Harmanpreet, who also became India’s highest-scoring Indian player in the history of Commonwealth Games, surpassing Sandeep Singh’s 7 goals in 2006. Harmanpreet has 9 goals so far in CWG 2022. India have never won a gold in Commonwealth Games 2022 and this year the hunger is reflective in team’s performance and game in Birmingham.