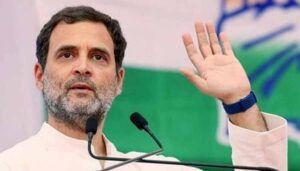 Congress MP Rahul Gandhi on Thursday lashed out at Prime Minister Narendra Modi over his “black magic” jibe saying that he must “stop demeaning the dignity” of the PM’s post by talking about such superstitious things.
Rahul Gandhi’s retort came a day after PM Modi referring to the August 5 protests in which the Congress had led protests against inflation, price rise and other issues by donning black clothes, said that those who resort to “kaala jaadu” (black magic) will never be able to win the trust of the people again. Gandhi further said that the government “will have to answer on the issues of the people”.
Modi on Wednesday said some people “are resorting to black magic as they are immersed in despair and negativity”. “We saw on August 5 that there was an attempt to propagate black magic. These people think that by wearing black clothes, their period of despair will end. But they do not know that however much black magic they do, resort to superstition, people’s trust on them will never be restored,” the Prime Minister said while addressing a function in Panipat via videoconferencing.