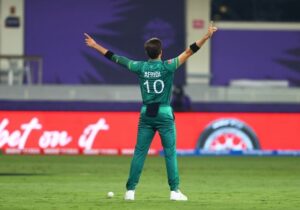 Pakistan will look to collect crucial World Cup qualifying points when they tackle the Netherlands in a three-match ODI series from Tuesday but will have a wary eye on the fitness of star bowler Shaheen Shah Afridi.The 22-year-old paceman suffered a knee injury on the recent tour of Sri Lanka, a worrying setback with the Asia Cup — and a meeting with old rivals India — coming up at the end of the month.
Pakistan team bosses do not want to overload a fast bowler who has already played 97 times across all three formats since his international debut just four years ago.”We’re taking a couple of doctors with us to take care of Shaheen and want him to play a game against Netherlands to see if he’s fit and ready for the Asia Cup,” said Pakistan skipper Babar Azam.”But we have 11 trump cards. Each of them can be match winners on their day. I have faith in every one of them, whether batters or bowlers.” The series in Rotterdam was postponed due to Covid in 2020.It forms part of the 13-nation Super League from where the top seven teams plus hosts India will qualify for the 2023 World Cup.