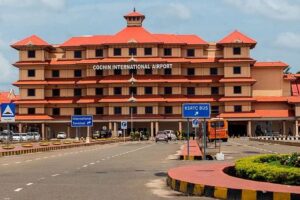 Drugs worth around Rs 60 crore were seized at the Cochin International Airport here on Sunday from a Delhi-bound Kerala native who had arrived in the port city from Zimbabwe via Doha.The seizure of nearly 30 kg of metha quinol drug worth about Rs 60 crore allegedly from Palakkad-native Muralidharan Nair’s baggage was announced by the Cochin International Airport Ltd (CIAL) in a statement.CIAL, in its statement, said that the drug was allegedly concealed in a hidden compartment in Nair’s bag and was discovered by its own security department during inspection carried out using state-of-the-art ‘3D MRI’ scanning machine.The passenger was handed over to the narcotics department and the drugs were sent to a government laboratory for testing, it said.