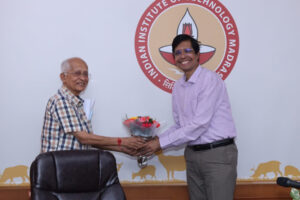 Chennai : The National Programme on Technology Enhanced Learning (NPTEL), IIT Madras, is collaborating with the Madras Dyslexia Association (MDA) to offer a Remediation Program for children with dyslexia studying in Tamil medium.

This program is being offered in online mode, completely free of charge through NPTEL. Early and timely identification followed by need-based intervention ensuresthat the child copes with the difficulties arising due to dyslexia and becomes a productive adult.With dyslexia being a language-based processing difficulty, it manifests itselfas a difficulty in processing not just English but other languages as well, a
release from IIT-Madras said today.Hence, MDA has designed and developed ‘Tamil Vazhi Payirchi’ to enable identification and intervention for children with dyslexia studying in Tamil medium primary schools.

‘Tamil Vazhi Payirchi’ was launched by IIT-Madras Director Prof.V.Kamakoti and MDA President D.Chandrasekhar in the presence of other stakeholders.Speaking on the occasion, Kamakoti said, “This initiative is a power answer to the question of IIT Madras’ relevance to the wider society. Not only is the institute providing technical support through NPTEL, but also through its alumni ( D. Chandrasekhar) who is spearheading this initiative.

Tags:NPTEL of IIT-M to offer remeditation prog for dyslexia children