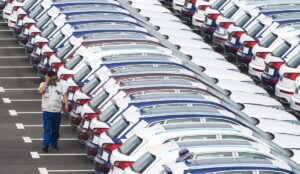 Mumbai : Retail vehicle sales for the month of August 2022 saw year-on-year growth of 8 per cent, said the Federation of Automobile Dealers Associations (FADA).Except for tractors, which decreased by 32 per cent, all the other categories have seen a growth in sales.Two-wheeler, three-wheeler, passenger vehicles and commercial vehicles sales were up by 8.5 per cent, 83 per cent, 6.5 per cent and 24 per cent, respectively.According to FADA, when compared with August 2019, a pre-covid month, total vehicle retails continued to fall by -7 per cent.While passenger vehicles showed double-digit healthy growth of 41 per cent, growth in commercial vehicles also turned positive by 6 per cent.All the other categories were in red with two-wheeler three-wheeler and tractors falling by 16 per cent, 1 per cent and 7 per cent, respectively.According to FADA, a good monsoon failed to ignite festive spirits thus impacting demand during Ganpati.”As semi-conductor supply continues to ease, Auto Retail and PV segment especially, geared up to have the best festive season in a decade.” Commenting on August retail sales data, FADA President, Manish Raj Singhania said: “Auto Retail for the month of August’22 saw an overall growth of 8%. August opens the door for festival season to kick in. While Dealers anticipated good Ganesh Chaturthi in August, the results thus far have not been encouraging. In spite of good monsoons, the festive season began with a dampener during Ganpati.While the two-wheeler segment has grown by 8.5 per cent year-on-year, it continues to face Covid blues due to the underperformance of Bharat and is still not above 2019 levels.This coupled with price hikes has made the two-wheeler product out of reach for most entry-level customers.”With erratic monsoon, the crop realisation has been low and flood like situation has restricted customer movement.” The three-wheeler space continued its healthy double-digit growth when compared year-on-year. It has now also equalled 2019 sales for the first time.