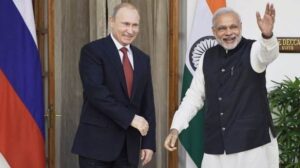 The Indian Ambassador to Uzbekistan Manish Prabhat had said earlier that Prime Minister Narendra Modi will attend the summit and hold bilateral meetings with several leaders.”Leaders of SCO member countries are meeting after two years due to the COVID pandemic. Some bilateral meetings will take place on the sidelines of the SCO but the programme of the meetings will be finalised in due course,” Ambassador Prabhat said in an exclusive interview.”Economic cooperation in the SCO is an important question, which, of course, will be discussed in the SCO meetings. When we are meeting with central Asian countries, we discuss connectivity which will promote trade, investment and other exchanges between Indian and central Asian countries,” he said.

Tags:Modi to have bilateral meetings with Putin during SCO summit