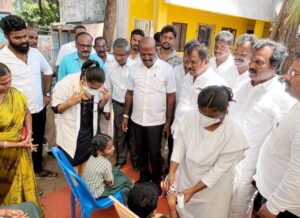 The State government is conducting over 1000 medical camps across Tamilnadu following increase in H1N1 influenza (swine flu) cases especially among students. People with symptoms of fever, cold and cough can visit these camps for consultation.
Health Minister Ma Subramanian said that the State was fully geared up to tackle the viral infection. According to the Minister, Tamilnadu recorded 368 confirmed cases of H1N1 influenza on Monday, and among them 42 are below five years, 65 people are in the age group of 5-14, 192 are aged between 15 and 65, while 69 people are aged above 65 years.
Meanwhile, as the cases of seasonal flu and Influenza increase, doctors say that negligence of safety measures is another cause of increased number of cases, especially among children. Doctors suggest that people should refrain from self-medication and seek timely medical help.
Doctors also say that the risk of dengue is likely in the coming days and people should practice several preventive measures to prevent a dengue outbreak