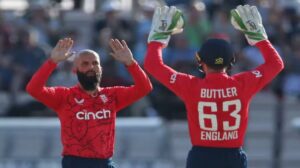 London : England stand-in skipper for the seven-match T20I series against Pakistan Moeen Ali has indicated his side will not put pressure on itself thinking about the upcoming World Cup, saying the side will focus on one game at a time in the global event.Moeen is leading England in the T20I series against Pakistan, which begins later on Tuesday at the National Stadium here, as regular white-ball captain Jos Buttler is nursing an injury.

“It is important we don’t put pressure on ourselves and say we are going to win a World Cup. We have been such a good side over the last two or three years but we have missed out too sometimes which is about weight of expectation,” Moeen was quoted as saying by Daily Mail.England were unlucky in 2021 where despite a superb tournament, they lost to New Zealand in the semifinal of the T20 World Cup in the UAE last year.This year, under new skipper Buttler, England have lost all three T20 series and several key players are either injured or have been rested ahead of the mega tournament in Australia.We need to focus on one game. The World Cup, we win one game at a time, by playing our best cricket and not worrying about the end result. That will take care of itself. It suits our style to be not so desperate for something. Of course, everyone wants to win it, but let’s see how it goes and play our best,” added Moeen.

Tags:Will not pressurise ourselves thinking about T20 WC: Ali