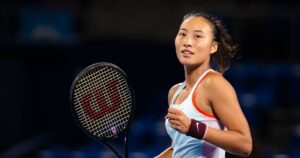 China’s Zheng Qinwen continued to soar in her breakthrough season, knocking out No 1 seed Paula Badosa 6-3, 6-2 in 78 minutes in the second round of the Pan Pacific Open to reach the quarterfinals of the tournament, here on Wednesday.This is the 19-year-old’s first completed Top 10 win. Previously, she had advanced over Ons Jabeur via retirement in the second round of Toronto. It puts Zheng into her third tour-level quarterfinal of 2022, and second at WTA 500 level or above.”It was a big match for me. Even though the score was like this, there were a lot of emotions for me in this match and I’m very proud of myself. It’s not a surprise – I always knew I had the level, I just had to make it,” said Zheng.The teenager’s overall record this year is now 34-15, and 19-15 at the tour level. Having ended 2021 at No 143, she has risen to a career-high this week of No 36. She also came into this match in supreme form after a 6-1, 6-4 first-round defeat of Misaki Doi that had seen her win 19 points in a row.