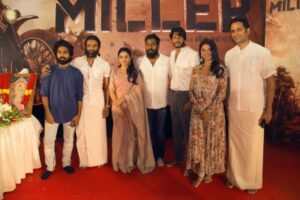 The National-Award winning actor Dhanush’s big-budget period film ‘Captain Miller’ to be directed by Arun Matheswaran has been launched grandly with a pooja ceremony.Versatile actor Sundeep Kishan, who is playing a significant role, and the gorgeous Priyanka Mohan who will be seen opposite Dhanush also participated in the event. Captain Miller’ had earlier grabbed attention with its spectacular first-look motion poster. The team is setting high expectations, before starting the project, with massive announcements. The movie also features many noted actors in important roles.