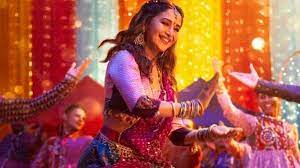 Bollywood actress Madhuri Dixit, who hails from a Maharashtrian background is set to be seen in an unprecedented avatar as a Gujarati housewife in the upcoming streaming movie, ‘Maja Ma’. The trailer of the film was unveiled before the media on Thursday at a five-star property in the Juhu area of Mumbai.The movie presents Madhuri Dixit in a complex and fearless avatar. Talking about her part in the film, the actress said in a statement that she is “thrilled” to be a part of the movie.She told the media in attendance: “With ‘Maja Ma’, what I am most excited about is my character. It is a role with complex nuances that I have never played before. Pallavi Patel carries enormous responsibility – as a mother, as a wife and as a contributing member of society with such ease and grace, that it becomes easy to overlook her strength, conviction, and resilience. She goes through a multitude of emotions that could have strong repercussions on herlife and the lives of people she loves.”This will be the first time when Madhuri will be seen dancing to Garba beats. The film also stars Gajraj Rao, Ritwik Bhowmik, Barkha Singh, Srishti Shrivastava, Rajit Kapur, Simone Singh, Sheeba Chaddha, MalharThakar and Ninad Kamat in pivotal roles.