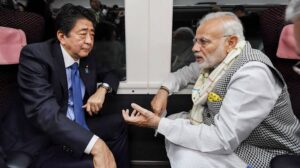 Prime Minister Narendra Modi on Tuesday extended his heartfelt condolences to his dear friend “Abe San”, late Japanese Prime Minister Shinzo Abe. In his opening remarks to Japanese counterpart Fumio Kishida in Tokyo, he conveyed his personal loss as Abe was his dear friend.“Today we are meeting in this hour of sorrow. The last time I came I had a long conversation with former Japanese PM Shinzo Abe. India is missing Shinzo Abe and remembering him and Japan,” said PM Modi during a bilateral meet with Japanese PM Fumio Kishida. He said that Abe had taken India and Japan relations to new heights and expanded them into many other areas. “Abe took India and Japan relations to new heights and expanded it into many other areas. Our friendship played a key role in the growth of the global perspective. The people of India remember Abe San for all the good works he has done. They are missing Abe San. But, I do believe that under your leadership (Kishida), India-Japan relations will grow strong and will attain new heights and will play a major role in solving the problems of the world,” added the Indian Prime Minister. Japan PM Kishida thanked PM Modi for attending the funeral of Abe and said that PM Modi, along with PM Abe strengthened India-Japan ties.