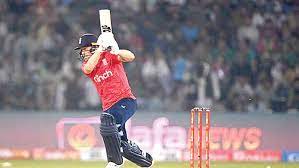 Phil Salt smashed a robust career-best 41-ball 88 not out to help England thrash Pakistan by eight wickets in the sixth Twenty20 international in Lahore on Friday. The England opener clobbered three sixes and 13 fours in the third fastest half century by an England batter in the shorter format to help his team chase down a target of 170 in just 14.3 overs. Salt’s fiery knock overshadowed Babar Azam’s 59-ball 87 not out that lifted the home team to 169-6 and saw Pakistan skipper equalling India star Virat Kohli’s record of the fastest man to 3,000 runs in cricket’s shortest format.England’s victory tied the seven-match series 3-3 with an intriguing final match in Lahore on Sunday.England, who failed to chase 146 on Wednesday, were given a rousing start by Salt and Alex Hales who compiled 50 in just three overs.Hales, who smashed four fours and a six in his 12-ball 27, holed out after a breezy 55-run start off just 24 balls before Dawid Malan helped add 73 for the second wicket with an 18-ball 26.Ben Duckett remained not out on 26.