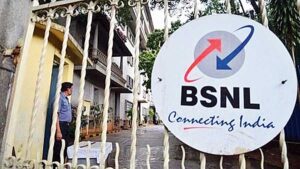 BSNL will start rolling out 4G network from November onwards and gradually upgrade it to 5G by August next year, a top company official said on Monday.The company has plans to roll out almost 1.25 lakh 4G mobile sites in 18 months, BSNL chairman and managing director PK Purwar told PTI at India Mobile Congress. ”The first roll out (of planned 4G network) should take place in November,” Purwar said. The company is in discussion with IT major TCS and state-run telecom research and development organisation C-DOT-led consortium to deploy indigenously developed 4G technology in the network.Purwar said the 4G network gears that the company is purchasing will be upgradable to 5G through software updates. When asked about the timeline of BSNL’s plans to roll out 5G services, Purwar said the company is on its path to deploy 5G as per the deadline of August 15, 2023, set by Telecom Minister Ashwini Vaishnaw. ”The minister has given us a clear path that the 15th of August 2023 should be the date when BSNL should be in the 5G domain. We are working in that direction which we have received. We should be able to meet it (the target timeline),” Purwar said. Talking about revenue dynamics, all telecom operators should look at digital inclusiveness and connect the unconnected with digital technologies. ”There should be an investment in the network for everyone to get good service and roll out should be faster. Unless operators have enough resources they will not be able to make the investment in the network. Unless investment is not made in network technology, many people will be left out from taking advantage of newer technologies,” Purwar said.

He also said that India has one of the lowest Average Revenue Per User (ARPU) and there is a need to look at if it is sustainable. ”Telecom operators are well placed to derive revenue from other sources as well but we have to also look at the fact that India has the lowest ARPU in the world. Can we sustain this level of ARPU and derive the new investment? we need to balance out these things,” Purwar noted.

Tags:BSNL to start rolling out 4G network from Nov