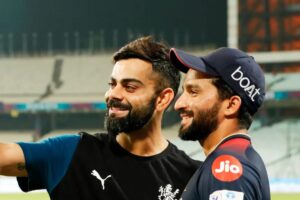 Indian batter Rajat Patidar, selected for the national side after good performances in Indian Premier League (IPL) and domestic cricket, said on Wednesday that Virat Kohli is his idol and he tries to imbibe his intensity in his own game.Patidar received his maiden national side call-up for three-match ODI series against South Africa, which will start from Thursday onwards in Lucknow.”Virat Kohli and AB De Villiers are my idols. They are highly experienced in international cricket. I looked at them and wondered how would I talk to them. But then they talked to me themselves, it was a good moment for me. It gave me confidence. I have learnt a lot from Dinesh Karthik, Virat Kohli, and AB De Villiers in the nets while playing for Royal Challengers Bangalore. Especially Virat, who carries the same intensity in both nets and matches. It feels good watching it and I try to add on that intensity in my own game,” said Patidar in a video posted by BCCI.Patidar admitted that his Indian call-up is a dream come true and said that the IPL 2022 eliminator against Lucknow Super Giants, where he scored 112*, was a turning point of his career. The batter said that he enjoyed his first practice session with Team India and felt good after talking and being appreciated by veteran opener and stand-in captain Shikhar Dhawan.”It feels good when legends appreciate you. It gives me motivation. When the team claps for you, it gives you motivation,” he added. On how he approaches different formats in IPL and domestic cricket, the batter said, “That IPL knock gave me confidence. But white-ball and red-ball cricket are different. I have the ability to play all formats. I try focusing on both formats separately, keep myself in present and play as per the demand of the team.”Patidar had a breakout IPL season with RCB this year, which saw him score 333 runs in eight matches at an average of 55.50 with a century and two fifties. He followed it with a match-winning ton in Ranji Trophy final for Madhya Pradesh and he ended the season with 658 runs, second in batting charts.The batter also impressed on his India-A debut, scoring 319 runs in four innings at an average of 106.33, including a century on his debut against New Zealand A. He also scored 65 runs in two innings in the ODI series after the Test series against NZ-A.India squad against South Africa: Shikhar Dhawan (C), Shreyas Iyer (VC), Ruturaj Gaikwad, Shubhman Gill, Rajat Patidar, Rahul Tripathi, Ishan Kishan (WK), Sanju Samson (WK), Shahbaz Ahmed, Shardul Thakur, Kuldeep Yadav, Ravi Bishnoi, Mukesh Kumar, Avesh Khan, Mohd. Siraj, Deepak Chahar