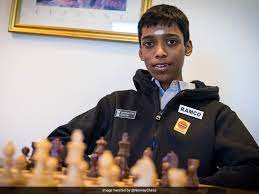 Top-seeded Indian Grandmaster R Praggnanandhaa and compatriot P V Nandhidhaa won the titles in the Open and women’s sections respectively in the Asian Continental Chess championship here on Thursday.Praggnanandhaa drew with compatriot B Adhiban in a 63-move game in the ninth and final round to emerge clear winner with seven points.The 17-year-old Chennai player had gone into the final round with half a point lead over the rest of the field. He held off the challenge from the experienced Adhiban and shared honours to win the top prize.The triumph also earned Praggnanandhaa a ticket to the next FIDE World Cup.S L Narayanan, Harsha Bharathakoti, Karthik Venkataraman and Shamsiddin Vokhidov, the other players who had an outside chance of a shot at the title, missed out after drawn games. While Narayanan and Vokhidov settled for a draw, Bharathakoti and Venkatarman had to be content with a half a point each after their game ended in stalemate.GM S P Sethuraman defeated IM Koustav Chatterjee in 41 moves to join five others on 6.5 points.Harsha Bharathakoti took the second spot on the basis of a better tie-break score while Adhiban was third.Narayanan, Vokhidov, Sethuraman and Venkataraman finished fourth to seventh respectively.In the women’s event, WGM Nandhidhaa drew her ninth round match against Divya Deshmukh to finish with 7.5 points. The 26-year old Tamil Nadu player remained unbeaten through the nine rounds and won six games. Priyanka Nutakki, Divya Deshmukh and Thi Kim Phung Vo (Vietnam) finished equal on 6.5 points but Nutakki took second place on the basis of a better tie-break. Deshmukh finished third and Vo was placed fourth.