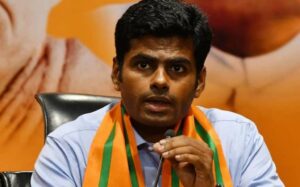 If the Tamil Nadu government is not willing to run state-run TANTEA estates in Nilgiris district and Valparai in Coimbatore, the Centre would take over and run it, state BJP president K Annamalai said here on Sunday.Addressing a large protest meeting here in Nilgiris district against the decision of the state government to hand over the estates to the forest department, Annamalai said nearly 5.25 lakh Tamils were brought to Tamil Nadu as refugees from Sri Lanka in 1963 and settled here.They were provided jobs after creating Tamil Nadu Tea Plantation Corporation (TANTEA) that has now 5,315 acres of estates in Nilgiris, he said.’Today brothers & sisters from Gudalur in Nilgiris assembled in huge numbers in support of our repatriated Tamils who’ve spent their lives helping TANTEA prosper. @BJP4TamilNadu will not let TN Govt disregard the plight of the Tamils like how the Sri Lankan govt did in 1948,” he said on his Twitter handle.However, the Tamil Nadu government has decided to hand over the land to the forest department, thus rendering thousands of workers jobless and homeless, the former police officer alleged.The BJP was the first to raise the voice in favour of Sri Lankan Tamils and the Centre has constructed 60,000 houses in that nation for the benefits of Tamils, Annamalai said.If the state government is not willing to run the estates, the Centre will take over and run them, he said.The BJP will not not accept the government’s announcement that houses will be constructed for 677 persons at a cost of Rs 14 lakh.”TN government’s mischievous attempt to sell this land parcel to Pvt owners is evident as no concrete measures have been undertaken to revive TANTEA. Fake promises and advertisements is all this @arivalayam govt is about,” the BJP leader said in another tweet.