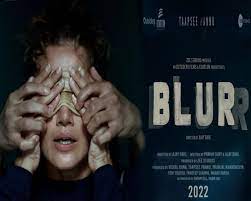 Taapsee Pannu-starrer psychological thriller ”Blurr” will have a direct-to-digital release on ZEE5, the makers announced on Wednesday.Also starring Gulshan Devaiah, the film is directed by Ajay Bahl, known for movies such as ”BA Pass” and ”Section 375”. ”Blurr” marks Pannu’s film project as a producer under her banner Outsiders Films.Pannu, who was last seen in edgy time-travel thriller ”Dobaaraa”, took to Twitter to share the release announcement.”There’s always more than what meets the eye! #BlurrOnZEE5 premieres 9th December,” she captioned the motion poster of the upcoming film.Penned by Pawan Sony and Bahl, ”Blurr” chronicles the story of a woman ”caught up in unavoidable circumstances”.The movie, shot extensively in Nainital, is also produced by Zee Studios and Echelon Productions.