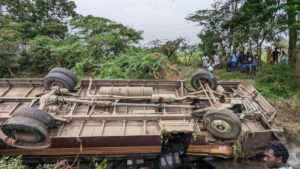 At least 20 passengers were injured when a state transport bus overturned and fell into a canal at Komangalam near Virudhachalam in Tamil Nadu’s Cuddalore district on Monday, police said.  The injured are admitted to Virudhachalam General hospital, where the condition of a few is stated to be serious.  According to Virudhachalam police, bus driver Saravanan lost control after he tried to swerve to avoid hitting a minivan coming from the opposite direction, and the bus fell into a canal.  Tamil Nadu Transport Minister S.S. Sivakumar, who was passed through a nearby area, reached the spot and made arrangements for the ambulances, and spoke to the doctors at the Virudhachalam general hospital.  The bus was proceeding to Virudhachalam from Seppakkulam village and had 40 people on board.