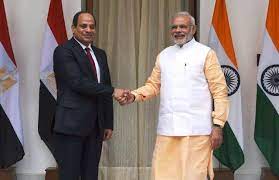 Egyptian President Abdel Fattah El-Sisi arrived in New Delhi on Tuesday and was accorded a warm welcome. He will be the chief guest at the 74th Republic Day parade. He is accompanied by a high-level delegation, including five ministers and senior officials for his official visit from January 24-27. As he arrived in New Delhi, the traditional folk dance is being performed to welcome Abdel Fattah El-Sisi. It is pertinent to mention that this is the first time the President of Egypt has been invited as the chief guest on Republic Day. Notably, India and Egypt are celebrating 75 years of establishment of diplomatic relations this year. India has also invited Egypt as a ‘guest country” during its G20 Presidency.