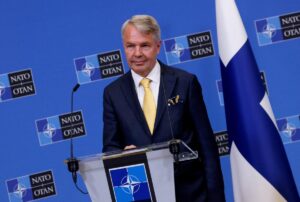 Finnish Foreign Minister Pekka Haavisto indicated that Finland may have to join NATO without Sweden after Ankara cast doubts on the expansion of the alliance over anti-Turkey protests in Stockholm, reported euronews. Haavisto in a statement on Tuesday said that Finland must consider joining NATO without Sweden after Turkish President Recep Tayyip Erdogan ruled out giving a green light to Sweden’s bid, following a Quran-burning protest in Stockholm. Joint membership of the two Nordic countries remains “the first option” but “we obviously have to assess the situation, if something has happened which means that in the long term, Sweden can no longer move forward”, said Pekka Haavisto, reported euronews. Haavisto’s statement implies that Finland is now considering proceeding without its Nordic neighbour, though he also emphasized that it is “too early to tell.” Sweden and Finland have been jointly applying to join NATO, but Turkey has so far blocked the expansion, citing concerns that Sweden needs to crack down on exiled Kurdish militants and their sympathizers and extradite critics of Turkish President Erdogan, reported euronews. The joint bid by Sweden and Finland to join NATO requires the approval of all existing members, including Turkey. Until now, the two countries have been committed to joining the alliance together, but Haavisto’s comment suggests that this may no longer be the case. The statement follows a recent Quran-burning protest in Stockholm, which resulted in Turkey ruling out support for Sweden’s bid to join the military alliance. Swedish Foreign Minister Tobias Billstrom has stated that “we are in contact with Finland to find out what is really meant.” On Monday, Erdogan said Sweden could no longer count on his country’s support, following a Quran-burning protest in the Swedish capital that sparked protests in Turkey and the Muslim world, reported euronews. The Danish-Swedish far-right politician Rasmus Paludan set fire to a duplicate of the Muslim holy e-book on Satu