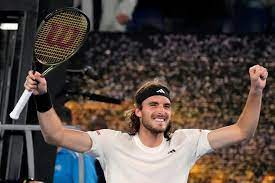 Third-seeded Stefanos Tsitsipas defeated Czech Jiri Lehecka to reach the men’s singles semi-finals of the ongoing Australian Open here at Rod Laver Arena on Tuesday. Tsitsipas prevailed 6-3, 7-6(2), 6-4 in the pair’s quarter-final clash at Melbourne Park, although the straight-sets scoreline disguised a closely-fought encounter. In the two hours and 17 minutes of play against Lehecka, Tsitsipas saved all eight break points he faced, routinely generating accurate and potent serves to get out of tough situations. The World No. 4 rode solitary breaks in the first and third sets, and a brilliant tie-break performance in the second to go past the finish line. The win on Tuesday extended his unbeaten run across events this year to 9 matches and will also see him play his fourth semi-final at Melbourne Park. In another last-eight clash, Karen Khachanov of Russia advanced to his second consecutive Grand Slam semi-final after American Sebastian Korda retired in the third set with a right-wrist injury. The 18th-seeded Russian was leading 7-6(5), 6-3, 3-0, having won seven straight games, when the American took a medical timeout and retired shortly after. Wimbledon champion Elena Rybakina trounced Jelena Ostapenko on Tuesday to reach the semifinals of the Australian Open 2023 at the Rod Laver Arena. Elena Rybakina is the first player to book a spot in the Australian Open 2023 women’s semifinals after triumphing in a battle of grand slam winners. The 22nd seed overpowered Jelena Ostapenko 6-2 6-4 in a one-hour and 19-minute encounter, becoming the first woman representing Kazakhstan to reach the final four at Melbourne Park. “I think of course I got all the experience at Wimbledon, and it’s helping me now here in Australia and I know what to expect,” Rybakina told the press, after her win. “Feeling good on the court and just really enjoying every match I’m playing here,” Rybakina said after the win as quoted by WTA. Ostapenko, the seventeenth seed, came into the contest