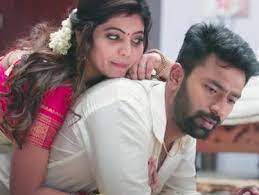 The film is about the first night room. Shanthanu gets married to Athulya Ravi. His grandfather Bhakiyaraj putsforth a condition and warns him if he disobeys his words, their entire property would go to an ashram. Meanwhile Athulya Ravi’s aunt Urvashi, has other plans and wants Athulya to execute it. Meanwhile a group of men that includes Yogi Babu, Manobala, Mayilsamy and Munishkanth have other plans.
Shanthanu does a good act. He plays his part well. Athulya is cute and bubbly. She is a welcome addition to Tamil cinema. Bhakiyaraj does what is typical of him. Mayilsamy and Yogi Babu tried to evoke humour. Producer Raveendran plays a cameo in the movie.
The movie is all but what happens in a first night room. And it proceeds on an expected lines ending neither here nor there.
Tags: