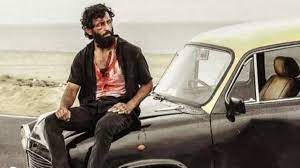 The movie is about a gangster Rocky (Vasanth Ravi) released from prison after 17 years. He comes in search of his missing sister (Rabena Ravi).. But hia past feud with a dreaded don Manimaran (Bharathiraja) landsbhim in trouble. He is forced to fight for his survival. In the showdown between Rocky and Manimaran, who eventually wins forms the crux.

Vasanth Ravi is the flesh and blood of the movie. A challenging role with just anger and frustration to portray, he comes up champs. Bharathiraja as Manimaran is fresh for a gangster in Tamil cinema. Poo Ramu plays his part well. A bunch of unknown faces playing quirky roles sits well for the story.

Rocky is not for the weak-hearted. It is filled with blood and gore. Anger leads to bloody battle. The director deserves apart for filming the movie ina strikingly different way from regular cinemas here. But had the violence been tinted down,it could have been a completely different fare. But none the less,Rocky sets a new path in K’town.