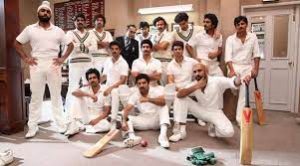 Dream big and achieve big. This was taught by Kapil Dev, when he led hiabside to victory in 1983 World Cup in England. The victory is sweet for Team India was as underdog with  everyone seeing them as minnows. The journey from.underdogs to champs by Kapil’s team has been recreated by Kabir Khan in 83. Ranveer plays Kapil while Jivva is cast as Srikanth and a bunch of artistes including Deepika Padukone playing pivotal roles.

India, who had only won a single World Cup match before the tournament, were deeply unfancied outsiders in 1983. Kabir  Khan frames the arrival in England of Kapil Dev, and other now legendary cricketers such as Sunil Gavaskar (played by Tahir Raj Bhasin) and Roger Binny (Nishant Dahiya), in jauntily comic underdog vein. With manager PR Man Singh by their side, the team created history. The movie chronicles the journey match wise with several back up and motivational stories. Fun, anger, agony and frustration are brought out well.

Ranveer lives as Kapil Dev. Not just in looks, but body language and suction too. He holds the entire movie together. And every other character including that of Cheeks played by Srikanth adds zing and excitement. The entire nation celebrating, soldiers at border in ecstasy, communal clashes ending because of WC triumph were brought out well. Sports breaks boundaries and unite people. Kapil proved it with WC triumph.

Three cheers to Ranveer, Kabir Khan and the rest. A wonderful recreation of marvellous moments from 1983 triumph.