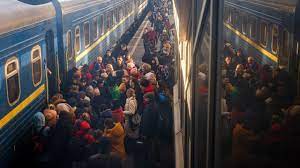 A statement tweeted by the Indian Embassy in Ukraine read, ‘Advisory to Indians in Kyiv- All Indian nationals including students are advised to leave Kyiv urgently today. Preferably by available trains or through any other means available.’

Satellite pictures have captured Russian tanks on the outskirts of the Ukrainian capital. The city has been on edge since Friday. Over the weekend, it saw fighting on streets and attacks on residential buildings.

Yesterday, the embassy had asked students to go to the railway station in Kyiv, where special evacuation trains have been arranged by Ukraine to take people to the western region.