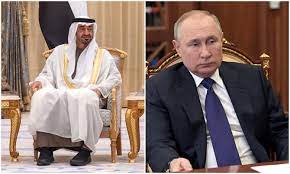 In a phone call, President Vladimir #Putin and Crown Prince of Abu Dhabi, Deputy Supreme Commander of the UAE Armed Forces @MohamedBinZayed praised the level of #RussiaUAE interaction in the political, trade, economic and other fields, Ministry of Foreign Affairs of Russia said in a tweet. Earlier when Russia on Friday (local time) vetoed a draft UN Security Council resolution on Ukraine, UAE abstained from the vote.

As the Russia-Ukraine conflict continued to evolve rapidly, the United Nations General Assembly (UNGA) called for an immediate ceasefire on the fifth day of tensions between the two countries.
Raising concern over the ongoing situation in Ukraine due to the military operation by Russia, United Nations Secretary-General Antonio Guterres on Monday said that escalating violence in Kyiv is resulting in the death of civilians.

Notably, on February 24 tension between Russia and Ukraine escalated when Russia recognized the independence of Ukraine’s breakaway regions following which the western countries have imposed tough sanctions on Russia.