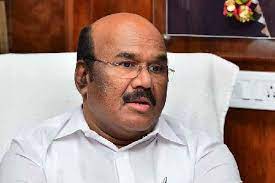 Chennai: The Madras High Court today granted conditional bail to former Minister and AIADMK leader D Jayakumar in an alleged land grabbing case for threatening a man into selling a land worth Rs 5 crore at a lesser price.

Recently, Jayakumar had obtained bail in a case booked for assaulting and parading a DMK worker without a shirt during the urban local body elections.

On Tuesday, the HC granted time till Friday for the Central Crime Branch (CCB) police in Chennai to file its counter affidavit to a petition preferred by Jayakumar in the third criminal case booked against him.

In his application, Jayakumar alleged the Central Crime Branch of the Greater Chennai Police ‘falsely implicated’ him in the case due to political vendetta by using Mageshkumar, brother of his son-in-law, Naveenkumar. He noted that the dispute over the property, on which both siblings had equal share, occurred in 2016 and later in 2020, but the police took action against him only now.