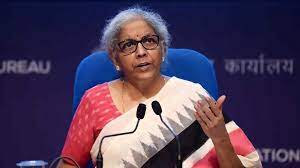 Mumbai: Finance Minister Nirmala Sitharaman on Monday defended a proposal to cut interest rate paid on employees’ provident fund deposits to over four-decade low of 8.1 per cent, saying the rate is dictated by today’s realities where interest rate on other small saving instruments was even lower.

Replying to a debate in the Rajya Sabha on the supplementary spending for the current fiscal, she said the decision to lower interest rate was taken by the central board of the provident fund managing body, EPFO, which has representatives of all stakeholders, including employee unions.

Her ministry is the nodal authority for approving the recommendation of the Central Board of Trustees of Employees’ Provident Fund Organization (EPFO).

‘EPFO has a central board which is the one which takes the call on what rate has to be given…and they have not changed it for quite some time. They have changed it now…to 8.1 per cent,’ the Finance Minister said.

The minister further added that it is a decision taken by the EPFO Central Board which has a wide spectrum of representatives in it.

She added that for 40 years the EPFO rates have not been brought down.

‘Yes, 40 years. There are today’s realities which do keep us in the context of decisions taken by the Central Board of the EPFO. It is yet to come to Finance Ministry for approval, but the fact remains that these are the rates that are prevailing today and it (EPFO) is still higher than the rest of them,’ she said.

Later, the House returned a money bill moved by Finance Minister, authorising the government for payment and appropriation of certain sums from the Consolidated Fund for the financial year 2021-22. The Upper House of Parliament also returned another Appropriation Bill for the expenditure done in the 2018-19 financial year.

Both the Appropriation Bills were passed by the Lok Sabha earlier.

In her reply, Sitharaman referred to pre-IPO valuation of LIC and said that the embedded value of the insurance behemoth was calculated in an ‘extremely scientific way’ and disclosed in draft IPO papers filed with SEBI.

The eligible policy holders of LIC will have up to 10 per cent reservation, and may get a discount on offer price, she observed.

On excess spending approval being sought, she said that the government has borne higher cost of urea, and not passed it on to farmers. ‘The government did not push the burden onto the farmers,’ she mentioned.