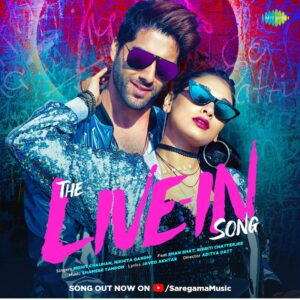 The Live-in Song has been released and it is all about the evolving world of millennials and the trend of living together instead of directly taking the plunge of getting married. With Javed Akhtar writing the lyrics to singers Nikhita Gandhi and Mohit Chauhan lending their voice for the song, this number is set up for success already.

This is the first attempt for Saregama Music to take up the new way of addressing a very relevant subject in today’s times through a song and introducing the concept of treating all couples equally and that ‘Live In is also Cool’.
The song which is composed by Shameer Tandon, is a step in a fresh direction. It aims to educate the minds of the older generation about the equal importance of living in with the ‘one’.

Javed Akhtar says, ‘I have written many songs in my life but I have a special importance for this new one as it represents a new way of thinking. It challenges the ancient beliefs that look down upon couples who want to stay together before tying the knot. I believe that the real bond between a man and a woman is not some ancient ritual but mutual love and respect.’

The Live-in song has been directed by Aditya Datt and it teaches us that with changing times, society also changes and it is important for us to keep up with the new ‘normal’.