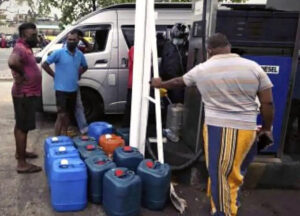 Colombo : Sri Lanka ordered troops to petrol stations as sporadic protests erupted among the thousands of motorists queueing up daily for scarce fuel.

The South Asian island nation is grappling with its worst economic meltdown in over seven decades, with rolling electricity blackouts and essential goods such as food and cooking gas also in short supply.

Soldiers were deployed after angry crowds blocked a main artery in Colombo and held up traffic for hours because they were unable to buy kerosene oil on Monday, government spokesman Ramesh Pathirana said.

We saw tourists being held up, we are also hearing that some people may be hoarding oil and that is why the government decided to deploy the military, Pathirana told reporters in the capital.

The troop call also follows the stabbing murder of a motorcyclist by another driver after a dispute over his place in a long queue for fuel outside Colombo.

Tempers are getting frayed as queues get longer, a top defence official told AFP on condition of anonymity.

A decision was made last night to call out soldiers to reinforce the police. This is to discourage any unrest.

Military officials said soldiers were deployed at pumping stations of the state-run Ceylon Petroleum Corp, which accounts for two-thirds of the fuel retail business in the nation of 22 million people.

President Gotabaya Rajapaksa’s office announced a summit of all political parties on Wednesday to discuss the economic crisis, but opposition groups said they planned to boycott the meeting.

Rajapaksa announced last week that the country will seek a bailout from the IMF, which says the government’s foreign debt burden of $51 billion is unsustainable.

The government announced Tuesday that it was seeking to restructure this debt and was looking for an international law firm to advise on the legal implications.

Shortages of foreign exchange have wrought havoc on almost every aspect of daily life, with authorities last week postponing term tests for millions of students because of a lack of paper and ink.