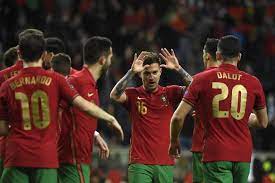 London : Portugal are through to a decisive World Cup qualifying play-off final next week after beating Turkey 3-1 in Porto on Thursday, but only after Burak Yilmaz missed a crucial late penalty for the visitors.

The home side were cruising at the Estadio do Dragao thanks to first-half goals by Brazilian-born midfielder Otavio and Liverpool forward Diogo Jota.

But Turkey’s veteran skipper Yilmaz pulled a goal back in the 65th minute, setting up a tense finish.

Turkey were then awarded a late penalty when a foul on Enes Unal was detected by the German referee following a VAR review, but Yilmaz put the spot-kick over the bar and Matheus Nunes secured Portugal’s victory in stoppage time.

The 36-year-old Yilmaz may now never get the chance to play at a World Cup as Turkey’s wait to return to the finals goes on.

They have not appeared at the World Cup since coming third in Japan and South Korea in 2002.

Portugal have not missed out on the tournament since 1998 and they will now expect to secure a spot in Qatar when they host North Macedonia in a play-off decider next Tuesday.