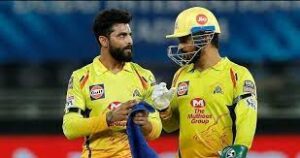 Islamabad : Former Pakistan leg-spinner Danish Kaneria reckons that Mahendra Singh Dhoni has taken the right decision to hand over the captaincy of Chennai Super Kings to Ravindra Jadeja as the former India captain wants to groom the all-rounder not only as a future leader of the franchise, but also of the national team.

Dhoni, the four-time Indian Premier League-winning captain, relinquished his captaincy of CSK just ahead of the start of IPL 2022.

Dhoni, whose on-field decisions are rarely wrong, has not said anything about handing over the captaincy to Jadeja, but it is believed that it is a plan to prepare a future captain for Team India as well as the Chennai side.

Apart from this, there are many matches which India won due to Dhoni’s on-field decision.

So I think giving the captaincy to Jadeja is a far-reaching decision. Look, the Indian team is a balanced one and captaining it in all formats is not an easy task. Virat Kohli was very good, but he has left captaincy.

Now Rohit Sharma has to lead in all three formats. Whether one accepts this or not, captaining India in all formats of the game is a pressure job,” Kaneria, who is fourth (261 wickets) on the list of bowlers with most Test wickets for Pakistan behind Wasim Akram, Waqar Younis and Imran Khan, said.

Today or tomorrow, India will have to think about split captaincy. Otherwise Rohit will be under pressure, and it’s bound to happen. If we talk about the formation of the Indian team, only few players are sure of their place in the team and Jadeja is one of them.

In such a situation, I think Dhoni’s decision has been taken keeping the future in mind, said Kaneria, a veteran of 61 Tests whose career got derailed after he was banned for life from all cricket by the English and Wales Cricket Board (ECB) in 2012 on two charges of spot-fixing in the English County Championship pro league matches in 2009.