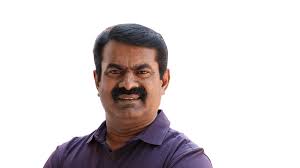 Chennai: Actor-director and Naam Tamizhar Katchi (NTK) Founder Seeman fainted due to dehydration will meeting the media at Tiruvottriyur in North Chennai on Saturday.

Seeman along with his party workers went to express solidarity with the residents of Annamalai Nagar, living near a railway gate at Thiruvottiyur for more than 40 years, who are protesting against
their vacation and demolition of the houses for constructing a subway, without providing them any alternative dwelling place.

When he was about to speak to the meday, Seeman suddenly fainted and fell on the ground perhaps due to dehydration as the city was under the grip of intense heat for the last couple of days.

He was immediately shifted to 108 ambulance where he was given first aid. Later, he boarded his car and left for his residence. Chief Minister M K Stalin and others enquired about Seeman’s health. Party sources said he is now doing fine and is taking rest.