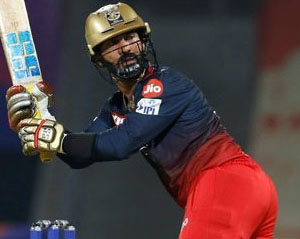 Mumbai : Dinesh Karthik (44 no) and Shahbaz Ahmed (45) added a quick-fire 67 runs for the sixth wicket to help Royal Challengers Bangalore chase down the 170-run target with five balls to spare. Earlier, sent in to bat, Jos Buttler (70 no) put on two big stands – 70 for the second wicket with Devdutt Padikkal (37) and unbeaten 83 with Shimron Hetmyer (42 no) for the fourth wicket – to help Rajasthan Royals post a competitive 169 for 3 in 20 overs at the Wankhede stadium in Mumbai.

Dinesh Karthik, Player of the Match, said, ‘ I think I made a conscious effort this year to do justice to myself because the last year, I felt I could have done better. The way I trained was much better this time around. Credit to the person who trained with me. I’m making a conscious effort to tell myself that I’m not done yet. When I went in, we needed 12 rpo and had to keep going. I train for these situations. To stay calm and know whom you can take down. I’ve tried to play as much white-ball cricket as possible, and prepare as many scenarios as possible. Lot of people have spent time with me in this journey, leading upto the tournament and it’s the work that goes unnoticed mostly. I think T20 cricket, it’s mostly premeditating but you also need to be clear about where to target.’

Winning skipper Faf du Plessis, said, ‘To pull it out of nowhere, you need some great characters and DK is as great a character as you can get. His composure under pressure is amazing. He is really calm and such a great asset to us. We bowled really well, upto the 18th over and then Jos got some good shots. Got a score which we thought was a bit above-par with the conditions and the surface spinning a bit. We started quite well though, but then Yuzi (Chahal) bowled really well to get them back in. But for me, the great thing about today once again was our ability to come back to win games out of nowhere. People think that since he (Shahbaz) is a small skinny guy, he can’t hit it long but he can smash it a long way. We didn’t bowl him today because of the wet ball and left-hander being around but he’ll definitely play a long part in this season. Virat is up there (in terms of fitness), I’ll tell that for his fans.’

Sanju Samson, said, ‘ I can’t point out one moment where we lost the game. I thought it was a great effort to put up that total on such a slow wicket after losing the toss. Jos and Hetmyer batted brilliantly at the death. Taking the match to the last over with the dew coming in was a great effort as well. (On whether he asked the umpires to change the ball because of dew) No I didn’t, I was confident about my bowlers. DK is someone with a lot of experience. We just need to take our time to set the field. Lot of positives to take out of this loss, and we can learn a lot of things as well.’

Harshal Patel said, ‘Very good. Like I always say, winning the game for the team and crossing the line is the reason why I play the game and this was one of those occasions. I had my plans when we came into the game to bowl the hard length and not a lot of slower balls as it is a very good wicket here but it turned out to be completely different, it is all about assessing and adapting to the conditions. At the top of my mark I am pretty sure what I want to bowl and my field placements is where I want the batter to hit me. There are certain things you can do and certain things you can’t do (when the batter moves around and premeditates).’