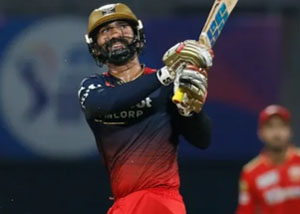 Karthik smashed an unbeaten 44 of 23 balls to fire RCB to a four wicket win after a batting collapse that put his team in deep trouble. Shahbaz Ahmed also made a crucial 45 off 26 balls to set up the win. DK is playing his best cricket.

I think he needs to put his name back into international cricket, doesn’t he, said du Plessis at the post-match presentation.

To pull it out of nowhere you need some good characters, and DK is as big a character as you can get. His composure towards the end, it’s unbelievable really.

It’s a big asset for us because that calmness towards the end allows players to just come in and do their thing, said the former South Africa skipper.

Karthik, who has made many national comebacks, last played for India in the 2019 World Cup. He wants to return to the Indian side as a designated finisher.

Having moved teams this season, Karthik said he needed to up his game.

I made a conscious effort to do justice to myself. Felt I could have done better in the last few years.

The way I’ve trained has been different. I was telling myself I’m not done yet. I have a goal and I want to achieve something, said the 36-year-old.