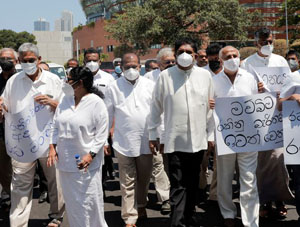 Colombo : Sri Lanka’s Finance Minister on Friday said that the crisis-hit country must urgently restructure its debt and seek external help, while the main opposition threatened a no-confidence motion and business leaders warned that exports could plummet.

The heavily indebted country has little money left to pay for imports, leading to crippling shortages of fuel, power, food and, increasingly, medicine. Street protests have been held nearly non-stop for more than a month, despite a five-day state of emergency and a two-day curfew.

“We cannot step away from repaying debt because the consequences are terrifying. There is no alternative, we must restructure our debt,” Ali Sabry told Parliament.

A repayment of $1 billion is due in July. JP Morgan analysts estimate that Sri Lanka’s gross debt servicing costs will amount to $7 billion this year in total. The government needs to address the financial crisis and work to improve governance, or we will move a no-confidence motion, Sajith Premadasa, leader of the Samagi Jana Balawegaya opposition group, said in Parliament.

It is imperative that Sri Lanka must avoid a disorderly debt default. The government must work to suspend debt and appoint financial advisers to start off the process of restructuring debt.

Parliamentary proceedings were suspended twice in the morning as rivals heckled each other, with two members temporarily removed from the chamber on the orders of the Speaker.

Sabry, a former justice minister, said political stability was necessary as the country prepared to start talks with the International Monetary Fund (IMF) this month.

This is not a time for politics, he said. We cannot wait, we must move immediately.